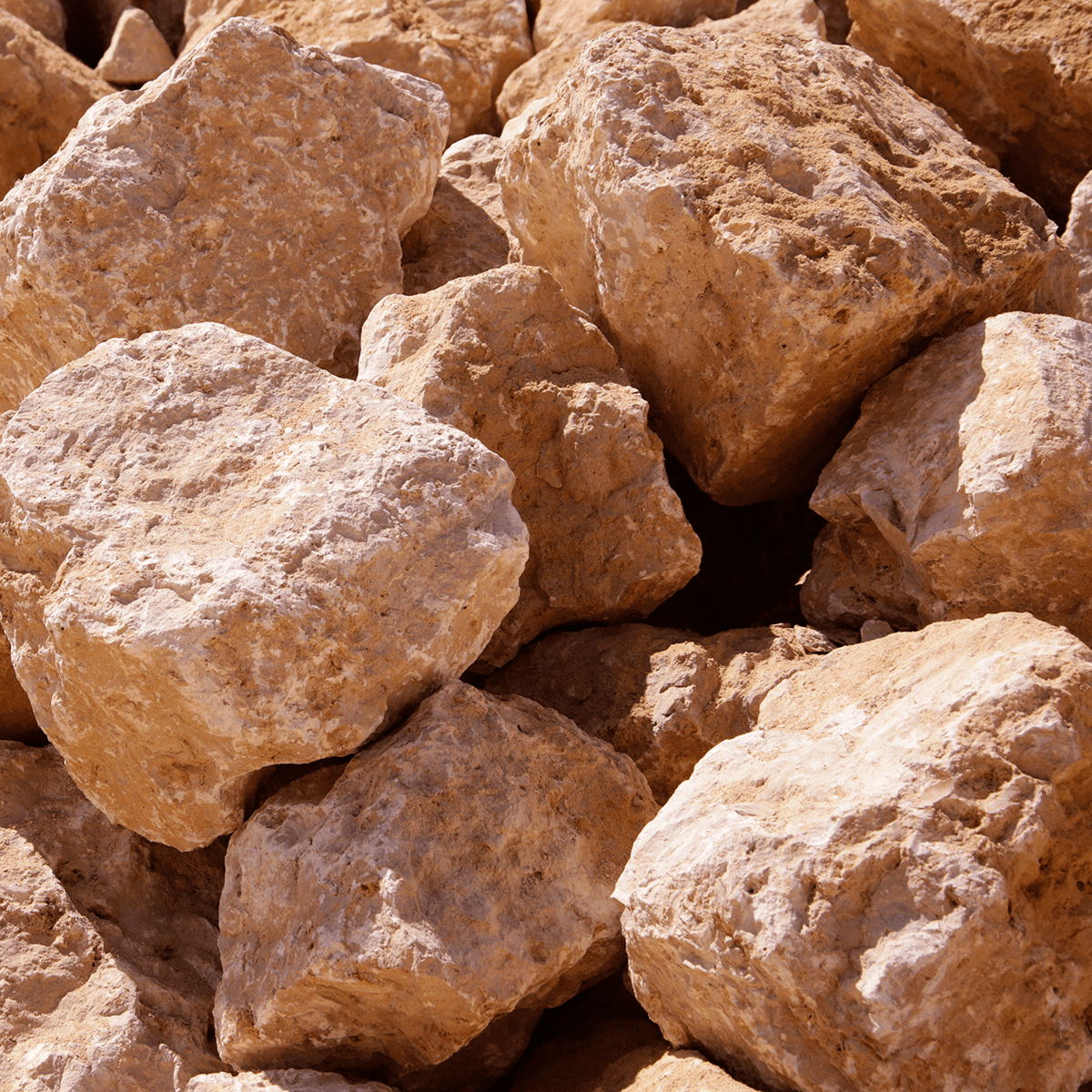 Like many of you, I’ve been curious as to what exactly the difference between the two is, so I did some research and here is what I found. Simply put, Dolomitic Limestone is just a variant of Limestone (a sedimentary rock), consisting of mainly magnesium calcium carbonate instead of calcite and aragonite. Dolomitic Limestone is also known as “Dolomite,” and is often preferred over Limestone because it has a harder composition, is less absorbent and more resistant to freeze-thaw cycles, and has a higher resilience to acidic erosion.

Curious to know more? Let’s dive deeper into the difference between the two materials.

What is Dolomitic Limestone

Dolomitic Limestone has been around for a very long time and has gone through many name changes over the years. Dolomitic Limestone was originally known as “Magnesium Limestone,” as it contains high levels of magnesium instead of just calcium. So just about anyone who can use magnesium should be interested in it. These days, it is now mostly referred to as “Dolomite,” “Dolostone,” “Dolomite Rock,” or “Dolomitic Limestone.” Scientists tend to call it a double carbonate rock, and only consider it Dolomitic if the limestone contains more than 10% but less than 50% of dolomite. Most people tend to use “Dolomite” to refer to all versions of the stone, but “Dolomite” is sometimes specifically used to describe the mineral, while other times it is used to refer to both the mineral and the rock. So it is safe to say, whatever you call it, someone will know what you’re talking about.

How Dolomite is Formed

Surprisingly, scientists are not really sure of the specifics behind how Dolomite is formed, but there are some working theories and general science involved. Dolomitic Limestone mostly consists of magnesium calcium carbonate CaMg(CO3)2, whereas regular Limestone mainly consists of calcite and aragonite (CaCO3), which are just two different crystal forms of calcium carbonate. Dolomite is formed through a process called “dolomitization,” where lime mud and limestone are altered by magnesium-rich groundwater, converting calcium into magnesium. Often times it’s difficult to distinguish between Dolomite and regular Limestone due to their very similar appearance, so when in doubt, hydrochloric acid is used to determine whether a rock is Dolomitic or regular. When doing this, Limestone will effervesce, while only Dolomite powder will effervesce, making it very easy to distinguish.

Curious about what happens when the stone becomes Dolomitic? Well, not surprisingly, Dolomitization causes a few structural and composition changes in the rock. The process that Limestone goes through to become Dolomite creates a slight volume reduction, resulting in a porous, trigonal-rhombohedral structure. I’m sure this sounds incredibly complex, but it basically just means the rock gets smaller and gains more pores and divots. Due to this porousness, Dolomite becomes a great reservoir rock, often sought after for exploration in oil and natural gas ventures. Dolomite also contains less impurities like clay and silt than regular Limestone does, and instead can act as a host rock for zinc, lead, and copper deposits, leading to a variation of colors. So if you’re looking for a more colorful option, you have quite a few.

Dolomite can be found mainly in sedimentary basins worldwide.

The Importance of Hardness in Aggregates

Now you may be wondering, what are the benefits to having a harder composition? Well, the upside to using Dolomite is its strength. It achieves a range of 3.5-4 on the Mohs Hardness Scale, while Limestone only rings in at a 3. This means a tougher, longer lasting result.

In addition to this, Dolomite has a lower solubility, making it resistant to dilute acid media, meaning it does not break down or erode nearly as fast as Limestone when subjected to the acid contents of rain and soil. Consequently, Dolomite requires higher temperatures before it starts decomposition, which makes it better for environments with varying temperatures; many outdoor walkways and structures use the stone as an outer or top layer.

In fact, studies have shown that Dolomite provides excellent binding materials for mortar and concrete as you can obtain dolomite lime and magnesium binder from it. There are numerous benefits to using these binding materials in concrete, one specifically being that it provides a great contact zone with organic natural fiber aggregate. Not only is it a great binder, but the fine and ultra-fine particles that are derived from it can act as a great micro-filler, which is an important component of concrete mixtures. Filling micro voids is crucial, as this process creates a more dense microstructure, meaning an increase in impermeability to the elements. In addition to improving the impermeability of the structure, Dolomite has been tested in lightweight aggregate concrete in comparison to natural sand. In these tests, it was found that Dolomite provides the same mechanical properties and water impermeability in addition to compressive strength as the natural sad did; the incorporation of Dolomite by-products also improved the stability and workability of the mixes.

So when it comes to durability and longevity, Dolomite is definitely the winner.

We already talked about Dolomite’s lower solubility levels and heightened impermeability, but what exactly does that mean when it comes to things like paving and cement? Well, thanks to Dolomite’s stronger, less absorbent nature, it holds up better to things like fluctuations in temperature, changing weather and seasons, and moisture. Water and acids take much longer to seep into the stone compared to its counterpart, Limestone. Since water takes longer and is less likely to seep into cracks, this means more resistance to the usual breakdown caused by freezing and thawing cycles, resulting in a longer lasting, durable structure.

But absorbency doesn’t only matter in maintaining a structure or producing a solid cement mixture, it also makes a huge difference in the production of asphalt. This is where choosing Dolomite instead of Limestone as your aggregate shows one of its biggest advantages. To put it simply, less absorption means asphalt makers don’t need to add nearly as much oil to their asphalt mix, saving time, money, and of course oil.

Why Dolomite is Used in Agriculture

We have mostly been focusing on Dolomite’s usage in aggregates and construction, but it also plays a huge role in agriculture. Let’s talk a little bit about that.

One of the benefits to using Dolomite over regular Limestone is its effectiveness in the agricultural industry. Due to the high concentration of magnesium in the stone, it is able to provide a highly effective, long lasting boost to nutrients in soil and balance the pH levels. In addition to being able to neutralize the pH, the lime that is introduced helps encourage the growth of microorganisms, which contribute to plant health.

The crystalline, porous structure of Dolomite also provides aeration to the soil, stimulating nitrogen production and absorption. This enrichment helps with both magnesium and potassium deficient plants, allowing them to flourish. Additionally this boost can last between 2-4 months, whereas regular Limestone would only last between 1-2 months.

While this article focuses mainly on the aggregate usage of the rock, many other vocations make use of the material. Some of Dolomite’s other uses include; acid neutralization, stream restoration, magnesia feed additives for livestock, use in pharmaceuticals, sintering agent and flux in metal processing, an ingredient in glass, brick, and ceramic making, and much more. This material is highly useful, resilient, magnesium-rich, and most importantly, often times less expensive than regular Limestone.

To sum up, the benefits to choosing Dolomite over regular limestone comes down to its longevity, durability, hardness, lower water and acid solubility, lower absorption, resistance to freeze-thaw cycles, impermeability to the elements, porous structure, strength, useful by-products, richness of magnesium, and it’s a money saver.

So, if what you’re looking for fits in with these benefits, Dolomitic Limestone is your solution!

Clay Slurry
Tweet
Share
Pin
Share
Email
Triumph on the Turkey River
What is the ordovician formation, and what makes aggregates from this formation better than others?